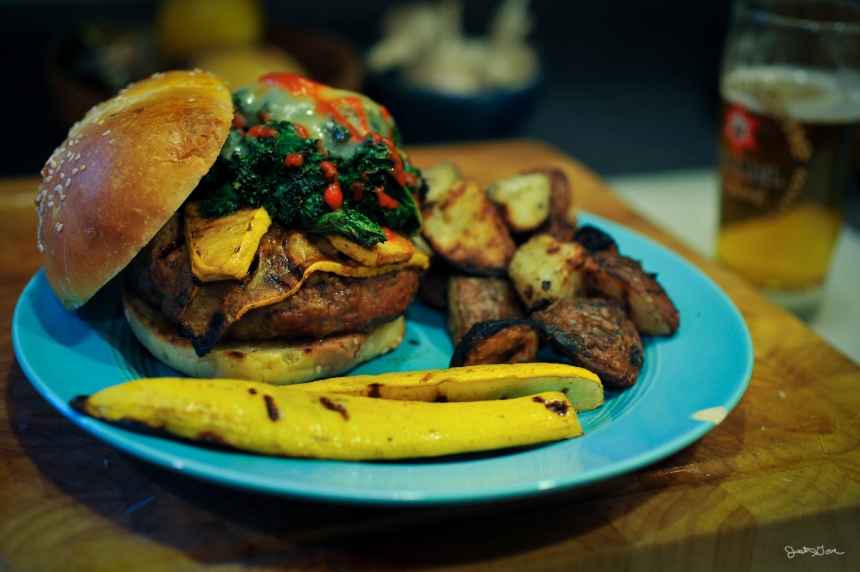 The land of burgers represents well-charted culinary territory. While I would generally consider this good news, since it is easy enough to find or find out how to make a decent burger, it does leave folks striving for innovation in bizarre and unnatural ways. Yes, the situation has become so desperate that we find people jamming them full of short ribs and headily declaring “the ultimate burger,” disguising them as anemic “sliders,” and hawking imitation fast food patties for twelve-plus bucks at trendy neighborhood bars (side of irony and Miller High Life not included).

I won’t claim to be the author of the kale burger presented in this article, but hey – did Christopher Columbus really discover America? While I am sure the kale burger has been done by thousands before and, for all I know the state of California observes Kale Burger Day every October 19th, there is a certain glory in the innovations that happen within one’s own kitchen. I had never had a kale burger before and so, to me, it was bewitchingly new.

Like most discoveries, the kale burger was one of chance and necessity. Or, in other words, an empty fridge. While I’d wisely thought ahead on Friday and stockpiled enough delicious Rosemont Market meat for the weekend, our Sunday burger toppings were looking slim. But what about kale? We had plenty of that. My husband, Justin, had recently taken to preparing kale with a light dressing of olive oil, soy sauce, red pepper flakes, garlic, and sugar. Sauteing until just tender, the greens were coming out ever so sweet and spicy, grounded by the earthy flavor of dark, rugged leaves. He was really putting my greens to shame.

And since my main squeeze is also a talented grill-master, the kale burger was a ball that lay firmly on this side of the court. So, I guess you could say I doubly did not discover anything new here, but I am going to write about it anyway (thanks, talented husband!). For my part, I would contribute by setting the table, popping the caps off a couple of Allagash Whites, and waiting patiently.

I once worked for a bit of a megalomaniac who was in the habit of affirming his preferences with superlatives. For example, his camera flaunted “THE BEST LENS AVAILABLE,” he drank only Starbucks because they had “THE BEST COFFEE,” and, no surprise, the do-it-all restaurant in his bland suburban town served “THE BEST BURGERS.” (Note: I ate there with him once and he ordered a chicken caesar salad.) I have a real aversion to using the word “best” for much of anything, so I won’t do it here with this burger. I will simply say that this burger kicked some major ass.

We topped them with a slice of extra sharp cheddar and a Jackson Pollock smattering of sriracha. The Thai hot sauce also factored  into the burger meat, which Justin blended in, along with a splash of soy sauce and a little bit of love. As for the greens, he prepped them as follows: Chop and wash two generous handfuls of kale, omitting the tough stalks. Add the still-wet leaves to a pan with 1-2 tablespoons of olive oil and 1 tablespoon soy sauce. Sprinkle on red pepper flakes to your preference, and a generous pinch of sugar. Optionally add a clove of chopped garlic. Cover and let simmer until tender, adding small amounts of extra water if needed.

The night of the kale burger’s inception we ate it simply, on a grocery-store bun and with a side of grilled asparagus. In later iterations it has benefited from a Rosemont sesame seed bun and, as seen in the photo above, a couple of slices of grilled summer squash. Vegging-up the burger makes me feel slightly less guilty about the half-pound of red meat I am consuming. And no offense to the lettuce leaf, but I actually think the sautéed kale is a better bedfellow to the beef. It also provides a nice, craggy bed for the cheese, preventing it from getting lost, as it so often does, in watery tomatoes.

Of course I’ll always love a classic burger, topped with a thick slice of summer tomato and crunchy lettuce. Or a bacon cheeseburger. Or a mushroom burger with bleu. But there is enough room in my heart for a large cast of hamburgers, all of which are pretty darn good.