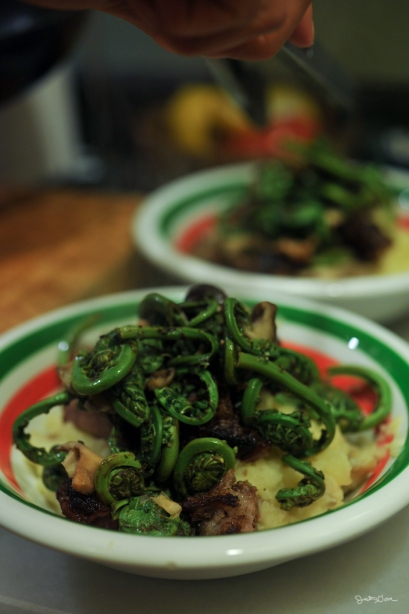 I must admit I had my doubts when I found myself alone in the kitchen with two pounds of butterfly-cut “capicola” pork shoulder. Those sweet-talkin’ butchers at Rosemont Market had sold me on it, and while anyone could see it was pinkly fresh and lovely, what the cuss was I going to do with it? I just couldn’t fathom that the technique they suggested, an 8-minute sear on each side followed by another 20 minutes in the oven, could really be the trick for this particular cut. Wasn’t this a low and slow, roasty kind of thing? Pork shoulder? I’m no expert when it comes to cuts of meat, and the Rosemont butchers have never once lead me astray, yet I always find it daunting to pull off a meal with something new. I mustered my courage. Well, I told myself, the only direction from here is forward.

However, what was the direction forward? While the butcher in question, Evan, recommended serving the pork with a mango-based salsa, I had forgotten to get fruit. I couldn’t bear the thought of facing the overcrowded supermarket in order to obtain what would likely be a sour, disappointing specimen, so I started the pork simply with my old friend and secret weapon, Central BBQ Rib Rub.

Until recently I traveled to Memphis about once a month for work, and it was a rare trip that I didn’t get to Central BBQ. It was the only barbecue joint I knew of that had negotiated partial desegregation with the genre of soul food. They offered collard greens on their menu, no small thing in a place where cole slaw, potato salad, and beans enjoy a gangster-like hold on the side dish menus of barbecue restaurants city-wide. They also sport an outdoor patio, friendly counter staff, local Ghost River brews, and lead in the city’s Project Green Fork movement to help restaurants integrate more sustainable practices.

Of course Central also had the rub. Most times I would justify squeezing into my suitcase a bag of pork rinds and extra-large shaker of Rib Rub, which is to say that we have a kind of bomb-shelter’s supply of rub. I don’t know what is in the rub, and I don’t care. Knowing would abuse the rub of its magic, and one day when I run out of it I will simply place a call to a Memphis contact and negotiate that a large box of rub be mailed to my house. Naturally, the rub is where I started with the capicola pork shoulder in question. I gave it a good rubdown and went on a walk to see if I could figure out the rest.

The Solution Part 2: Dinner in a Bowl

As is so often the case, I encountered sound logic while on my walk. I would make a potato mash, top it with chopped pork, and top that with garlicky fiddleheads. Done. When I got home I remembered the mix of oyster and shitake mushrooms in the fridge, which would make a nice addition to the fiddlehead sauté. And the scraggly end of cheddar cheese would find good purpose in the mashers, as would a healthy dose of buttermilk.

To say that things came together would be an understatement. This is by far one of my favorite could-have-been-a-disaster-but-it-turned-out-great inventions yet. Using Evan’s recommended technique, the pork developed a character not unlike a barbecue rib, with a crispy exterior bark and a tender, juicy interior that was well-blended with melty fat. The buttermilk and small amount of cheddar gave the buttery mashed potatoes a nice note of sour dairy that was countered by the earthy fiddlehead/mushroom sauté. Each was stronger for being partnered with the others, so the approach of layering them in a bowl was both easy and beneficial. Pleasing me even further, all of the ingredients were Maine-sourced except the mushrooms and, of course, the Memphis rub. 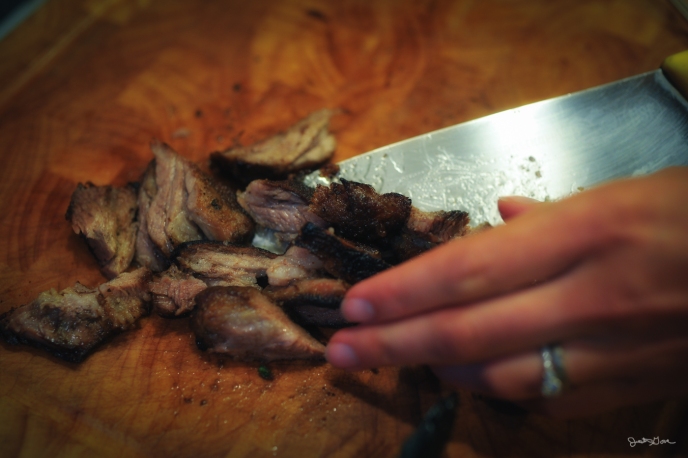 While the recipe that follows is a bit lengthy, I can assure you that this was not an overly complicated meal to make. Better, two pounds of pork made enough for four portions, and when we duplicated the meal the next night, the leftover pork was even better reheated. Warmed in a vegetable-oil coated cast iron pan, covered and at medium-low heat, the reheated pork formed an even crispier crust without losing any of the original juiciness or flavor.

The biggest imposition in recreating this meal would be getting a quality cut of meat (clearly no problem if you live near a Rosemont), and sourcing fiddleheads which are only foraged for a short period of time in May and June, typically in Maine, Quebec, or New Brunswick. But if you are reading this and fiddleheads either aren’t in your area, or aren’t in season, I’d imagine a worthy substitute could be realized in greens or – one of my favorites – fried okra!

But I digress. The recipe follows below. 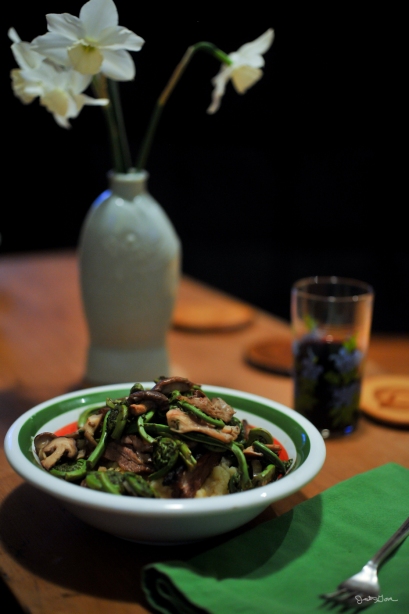 Rub your butterfly-cut pork shoulder (the “capicola” cut I got from Rosemont basically denotes the hog’s nape-area, also known as “capocollo” in Italian) with your preferred spice blend at least two hours before you plan to start cooking. Believe it or not, I just found the recipe for Central BBQ’s rub on Food Network’s website (I averted my eyes lest the secret reveal itself to me. I plan on living in mystery and, Borys, I’ll still be calling in that favor in a few years).

Preheat your oven to 350 degrees. Lightly coat a large cast-iron (or other oven-proof skillet) with vegetable oil and bring to temperature over medium-high heat. Add your pork to the pan, fattier side down, and cover. Cook for 8-10 minutes, reducing heat to medium if necessary. The meat should get a rich, dark sear to it, but you don’t want to burn or blacken it.

As your pork sears, wash and cube potatoes (I usually do one to one and a half medium-sized potatoes per person). Place in a saucepan and fill with cold water and plenty of salt; bring to a boil.

Flip and cook pork for another 8 minutes before transferring to the oven (still covered).

Now prepare your fiddleheads by snipping off any yucky stem ends. Wash in a colander or strainer, and add to a skillet that is suited to both steaming and searing. You are first going to steam the fiddleheads by adding about 1 inch of water to the pan. Cover and bring to a light boil. Note that you do not want to undercook fiddleheads as they will be very bitter. That said, you do not want a mushy fiddlehead! I usually find 8 minutes is just about right. (For more on cooking fiddleheads see my earlier post, Maine Fiddlehead Frenzy.)

Chop one clove of garlic and thickly slice shitake and/or oyster mushrooms; set aside.

Strain fiddleheads, and add 1 tablespoon butter to the pan, returning to heat. Once melted, add garlic, mushrooms, and salt; sauté for about 3 minutes before adding in the fiddleheads. Stir, turn off heat, and cover to keep warm.

As soon as the fiddleheads are added back to their pan, drain the potatoes and prepare the mashed potatoes to your liking. I apologize, I never measure anything! For my three medium-sized potatoes I added maybe 3 tablespoons of butter, 1/2 cup buttermilk, 1/4 cup milk, salt and pepper to taste. I mash this up with an old-fashioned potato masher, then mixed in about 1/2 cup shredded cheddar. Note that over-mashing will make your potatoes gummy.

Finally I retrieved my pork from the oven and chopped it up. I assembled the whole shebang in a shallow bowl, tots on the bottom, chopped pork in the middle, and fiddlehead mix on top.

There you have it. A delicious spring dinner in a bowl.